When cases of identity theft also often involve spousal abuse, victims can find themselves blocked from obtaining a police report to help undo the damage.

EDITED–SEP SUM BOX–When someone steals your identity, getting a police report can be invaluable in correcting your credit history, contesting collections suits and seeking damages — but accessing law enforcement can be uniquely challenging if the culprit is your husband.

Women looking to hold their spouses accountable for identity theft often confront implicit biases in the justice system, according to Naomi Young, an Equal Justice Works fellow embedded with the nonprofit Her Justice. Young said she’s seen dozens of women encounter echoes of old legal precedents that held women to be the property of men.

“There’s this assumption that if you marry someone, you’re consenting to let them do whatever they want to your body, to your identity — or to your credit,” Young said.

Intimate identity theft cases are more common than you may think. In 2018, roughly 2.2 million Americans experienced identity theft at the hands of people they knew. Making up 15% of all fraud victims, this group has increased sevenfold since 2015, according to Kyle Marchini, a senior analyst of fraud management with the advisory firm Javelin Strategy.

Recently published research in the Violence Against Women journal indicates that many of these cases may involve spousal abuse. A study of callers to the National Domestic Violence Hotline found that more than 70% of domestic violence survivors said their partners had hidden financial information from them. Over one in two reported that an abusive partner put debt in their name through a fraudulent or coercive transaction.

Katie, one of Young’s clients who spoke on the condition of anonymity, suffered identity theft at the hands of her estranged husband, a man she says verbally abused her for almost a decade before they separated several years ago.

Without her knowledge or consent, he’s been jointly filing federal taxes using her name. As a result, Katie’s recent application for affordable housing was denied due to income he’d reported for the two of them but never shared with her.

“I was very upset because he caused me not to get the apartment,” Katie, who crashes on the couches of friends and family, told Law360. “I don’t have a place of my own.”

She also learned that he applied for loans under her name. But when she tried to file a police report, officers told her that she needed to first get a divorce, a daunting hurdle for someone with no legal training and few resources.

“She ended up going to the police, I think, a total of five times to try and report this,” Young said. “But the police were not at all accessible to her. We gave up on getting the police report.”

According to New York Police Department Detective Ahmed Nasser, there’s no special requirement that people like Katie provide proof of identity theft or an underlying divorce when seeking help. He said police are supposed to “take the words from the complainant and then pursue.”

“Then an investigation has to be done, and that might require additional evidence,” he added.

In a September 2018 report, the organizations noted that police reports are often impossible for survivors to obtain.

“Many New York City police precincts refuse to take police reports for identity theft victims, especially when the survivor does not have the account documentation or a copy of his or her credit report,” the report stated. “As a further challenge for survivors, marital status is often used, illegally, as a basis to deny police reports when the perpetrator was a spouse.”

Melissa Koven, an attorney with CAMBA and co-chair of the city’s Domestic Violence and Consumer Law Working Group, said accessing account documentation and credit reports is especially hard for victims of economic abuse.

“It’s very common for clients to have not had any access to or knowledge of their financial situation when they were in an abusive relationship,” Koven said. “They might not have even had access to the mail.”

Other barriers persist as well: Young pointed out that many of her clients don’t know their identities have been stolen until they’re contacted by creditors or denied opportunities due to their defrauded credit histories. By the time they realize what’s going on, they might already be facing collection lawsuits in court for debt they never incurred. Young said an estimated 98% of respondents in New York City collections cases face their creditors alone, without counsel.

“It’s a poverty trap,” Young said. “You not only face the direct consequence of going to court and owing money, but also don’t have access to things you need to survive, like credit and housing.”

After NYPD wouldn’t issue a report, Young advised Katie to file a complaint with the Federal Trade Commission instead. She’s also helped her client file for divorce and an order of protection due to her husband’s ongoing harassment.

“I don’t want other women to experience what I’ve gone through,” Katie told Law360. “There are alot of people out there who don’t know how to get help.”

In addition to the legal and law enforcement barriers that can make justice hard to access for victims of marital identity theft, Marchini said many survivors may not be emotionally prepared to accuse people close to them.

“Because the victim may have a long history with the perpetrator, they are frequently less willing to fully pursue resolution of the fraud scheme through their bank or by filing a police report that implicates someone they know,” Marchini said.

As a result, he said three out of four victims of familiar fraud end up bearing liability and having to personally pay out of pocket. They’re also three times more likely to spend 10 hours or more resolving the problem, according to Javelin’s research. 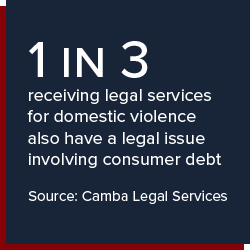 With such cases on the rise, groups around the country are pushing lawmakers to create better protections.

In an October 2018 report, the Institute for Women’s Policy Research called for more local and state governments to redefine domestic violence and assault statutes so that they cover economic abuse. It also recommended judges, police and prosecutors receive training on ways to hold offenders accountable and how to ensure safety.

In 2013, New York lawmakers passed a bill to add identity theft to the list of offenses that can serve as a basis for family court orders of protection, making it easier for victims to seek damages and other relief like protective orders.

Up until this year, New York was the only state in the country that explicitly includes identity theft in its definition of domestic violence and abuse, according to the National Conference of State Legislatures.

But in September, a new Texas law took effect that amended its definition of identity theft to include cases in which an abuser compelled a victim to take on debt through force, threats or fraud.

A January report by the policy group Texas Appleseed explained that such “coerced debt” can be everything from secretly using credit cards in partners’ names to physically abusing people until they sign onto loan applications.

On the federal level, the FTC offers an identity theft reporting portal to help victims recover. Young said she routinely advises clients to use the resource in case police are unhelpful.

For Koven, one of the biggest reasons victims of marital identity theft and coerced debt don’t get help is the simple fact that they don’t know they need it. She said legal services groups can help people find out if they’ve suffered marital identity theft by going to domestic violence shelters and offering credit screenings.

An example of such screenings can be seen in the New York working group’s DV CLARO Project, which started in 2010 and provides training to shelter staff members so they can spot consumer debt issues, pull credit reports for survivors and make referrals. Attorneys with the project also host clinics for survivors.

Though CLARO has been called a “best practice” strategy by city officials, it is limited to two shelters. CAMBA’s September 2018 report noted that volunteer attorney training and recruitment has also posed a challenge.

“We know that the need is there,” Koven said. “But whether shelters and providers have the resources and the funding to provide that type of individualized financial review and screening … that’s another question.”

Have a story idea for Access to Justice? Reach us at [email protected]